funding than ME/CFS!  Hayfever… that sniffling, sneezing, stuffy head, “achoo” condition is thought to be more serious and receives more help and respect than myalgic encephalomyelitis (ME/CFS)!  When you consider what many people think of this illness, I guess it shouldn’t be surprising.  I doubt any breast cancer patient has ever heard:

“You’re being lazy, you need to exercise”… or “You can’t be sick, you look fine”… or my favorite: “Oh I think I have that too! I get tired after doing 100 errands all day long”.

The message we receive from Doctors, Nurses, Research Organizations, some family & friends & the media is:  ME/CFS just isn’t that bad of an illness.  And if you do happen to be bedridden and look sick and have serious medical complications, well, then you can’t possibly have ME.  That’s what I was told by more Doctors than I could ever count.  I either “wasn’t sick & just being lazy” or I was “too sick to possibly have that fatigue illness”.

A new study, conducted by the Danish, was just released that measured the degree of disability in MECFS patients (ie: how severe is the illness and where do we fall on the scale compared to other conditions).  The results will probably be shocking to everyone except ME patients…

We have the lowest quality of life.  This comes as no surprise to me or probably any of us battling this illness.  I have friends & family that have battled many of the conditions compared to ME in this report and none of them were as debilitated as my case of ME/CFS.  Not even close.
A quote previously released by the Canadian ME/CFS Consensus reads:

“ME/CFS is actually more debilitating than most other medical problems in the world, including patients undergoing chemotherapy and HIV patients (until about 2 weeks before death).”   Canadian ME/CFS Consensus

That quote was stunning when it was released, but it was still just a quote.  This is the first study I know of that specifically compares the quality of life of ME/CFS to so many of the top illnesses out there.

Who was in the study?

All members of the Danish ME/CFS Patient Association (319 people) were asked to fill out questionnaires.
The questionnaire included something called the EQ-5D-3L (it’s a self reported, quality of life assessment).  From the 319 people, 105 ME patients were identified and gave responses that were valid to participate.

How did they come to this conclusion?

Often, you hear people say that self assessment reports don’t hold as much weight as say, a blood test that shows your “xyz is positive”.  I have always found that to be ironic as they are a much better gauge of people’s condition and severity.  After all, you can test negative for a condition and still have it.  Testing positive for Breast cancer for example, doesn’t show you how severe the disability of that patient will be.
Patients know their bodies better than any potentially inaccurate blood test and are able to self report, even the smallest detail, to incredible accuracy.

Here are some of the questions patients were asked on the EQ-5D-3L (you checked what applied to you): 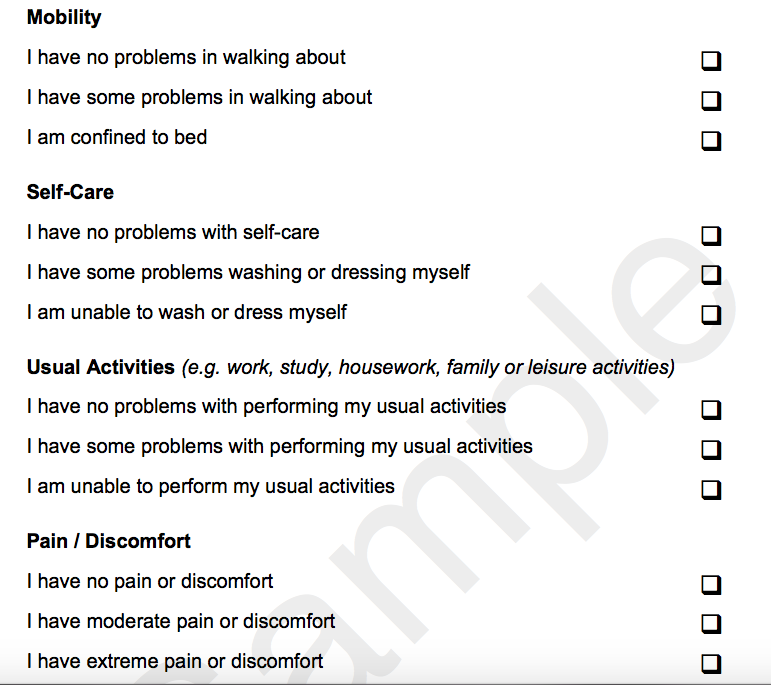 What illnesses weren’t we compared to?

The only thing that struck me as being noticeably missing on the list were illnesses like Lupus and Lyme Disease.  But since the Danish didn’t have a quality of life score for Myalgic Encephalomyelitis, it’s not a big leap to assume they probably don’t have one yet for Lyme either.

Whether you are severely ill or fairly functional, we share the same battle:  getting people to believe we have ME/CFS .  After all, no one could be completely bedridden, on oxygen and a morphine drip 24hrs a day and have MECFS… right?
This study might be small but it feels like a big step forward to me, to finally be able to say “wrong!” when that question gets asked and have a quantified severity of MECFS to back it up!

This blog is my life: the good, the bad, and the down right absurd.

Support & Tips that have Helped Me

Disclaimer: I am not a Doctor

My team of imaginary lawyers have instructed me to make it clear: I am not a Doctor, I don’t even play one on TV. I blog about my own experiences and as we all know, every patient is different.
Don’t try this at home, kids.